Coding Challenge – RGB Tilt Stick – Are you up to it? 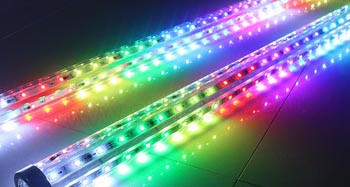 The idea of the project is to display RGB color effects on a 19 LED strip that has an accelerometer in it so it knows its inclination, and using the tilt (acceleration) to create interesting color effects.

I was thinking.. lets say we power it up and make it level and we see a red led in the middle position, as we tilt the strip the red led with “roll” left and right, like a level. But we need to take it up a notch and create cool effects with this rolling level and the available 19 RGB leds.

Daniel Shiffman from Youtube channel ‘The Coding Train’ creates a lot of very cool effect using Processing 5 as his language. In the end I will have to re-code what is coded as this strip runs from a small controller that is programmed in C or C++, so I would just create 19 circles in the screen to represent the 19 leds. Each color can be set with HSB color (hue, saturation, brightness) and the tilt or accelerometer can be simulated either with a mouse movement, or making a simulated strip on screen and moving (tilting) it there.

I envision one of the effects to look like mixing different color oils as a ball rolls through it, think of trying to look like splashing, or turbulent flow… I am sure you guys can some up with some very cool effects with this simple hardware. Another could be sort of based on snow globe in tube form with a ball that moves and “stirs” the effect 🙂

Full disclosure: Potentially it could end up in a commercial product, we are playing with that idea, if it does and your effects are used I will compensate you for the code.

The reason I have come to this group to ask is as I watch Daniels videos I see a lot if effects that could be used in such a scenario as this… the trick is its on dimensional which makes it a little harder to make look cool!

Some of Daniels work with Processing 5 and some effects I can see useful in this challenge.