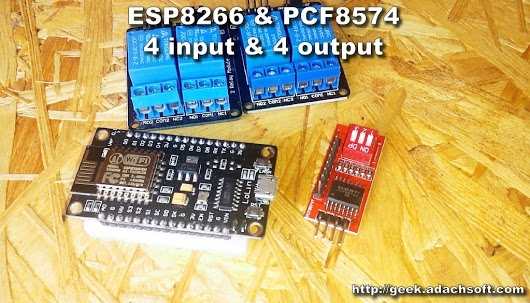 How to use ESP8266 with PCF8574 – 4 input and 4 output
How to increase the number of I/O pins on the ESP8266 using the PCF8574. This example will use four buttons (as inputs) and four relays (as outputs) and only one PCF8574 chip. The four pins of the PCF8574 chip will be set as inputs and four pins as outputs. In this example I will use NodeMCU but it works well on ESP8266-01. In this tutorial I will also show you, how to use jQuery AJAX with ESP8266. The software for the ESP8266 was written in the Arduino IDE. NodeMCU, ESP8266 is a very good solution for IOT (Internet of things).